Actually I sent this letter to Maple Ridge / Pitt Meadows News, however the the Editor told me he doesn't know will be this published or not. If the editor doesn't know, who knows? So, I decided to deliver my thoughts to residents of Maple Ridge. So, ...

that “public art can do a lot of good”?

But only if:
a) it clearly expresses the core idea to be delivered to the public;
b) it is executed in a top professional manner ;
c) it is installed in the right place.
Nobody would doubt it then.

The debates around the new object installed in downtown of Maple Ridge started from my e-mail to our mayor and art council of Maple Ridge with respect to this installation. I had no intention to write a letter to the newspaper, but just shared my concerns with the editors. Now I feel that it is time to step out and clarify the points that remain unclear or were misunderstood.
Obviously, it is unreasonable to argue about any piece of art, because someone could call it “an artwork” while another one could think it’s just “garbage”. Different people – different opinions. That’s why all over the world there are very simple procedures of collecting a public opinion prior to any public art installation. I will write about it below.
We all follow some communication rules in our life. There are some basics in art, too. One of them is the art of “seeing”. I remember our live drawing, painting, and sculpture classes where we, the future artists, were taught not only the technique, but also that art of “seeing”.
The ability to see, to go into deep understanding of “seeing”, interpretation and transformation of seeing into visual form, whatever it is, makes us artists.

Unfortunately, our readers were limited to just a description of the object discussed. The published photograph of it while assembling doesn’t give an idea of what it really looks like. So, let us take a look: 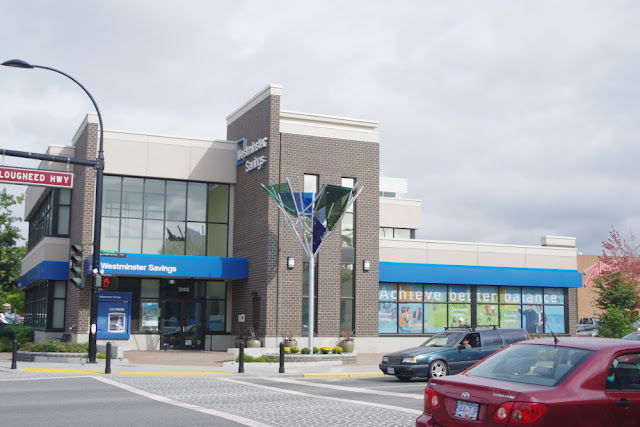 I took this picture across the street, from the other side of Lougheed, beside BMO on September 19th, just a few hours before the official opening. I give an opportunity to the readers to get their own impression of what it looks like. I found that the Balance (the core idea of the project that should be delivered to public) actually is not balanced, something is missed, and this “something” is a straw and a bottle that logically complete and balance the composition of the corner. Just like the edited model you can see on photograph 2. 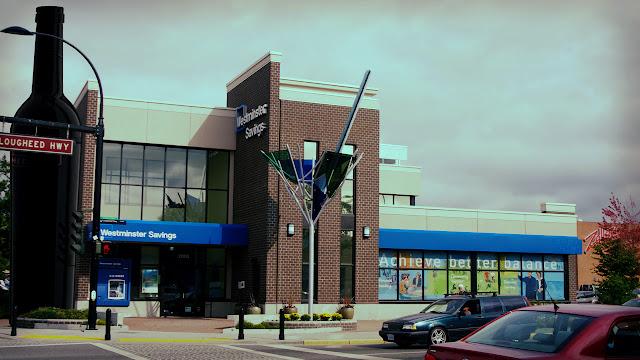 I totally agree with the opinion of Linda Nelson: this martini glass has a very “modern look” (quite crude, without charm and sophistication, but it’s OK). The point is that it seems that it is installed in a wrong place. Two reasonable explanations come to my mind: credit union (I’m sure the main commissioner) has secret plans to switch the profile to pub and liquor store (99.99% of English pubs are corner standing – this is a tradition), or is it a gentle hint to everyone who opens an account there that they will be welcomed with vodka – martini “shaken, not stirred” cocktail. Otherwise, there are at least two places where this installation would be more appropriate. One of them is just about 500 meters towards west, on the other side of Lougheed, near the Liquor store.

It was just fun. Ernie Daykin reminded me well known quote: "A day without laughter is a day wasted!" by Charlie Chaplin. So, we got fun.
Now let me discuss the idea of the project. The theme was “Balance”. I think that it will be useful for the creators of that object and others who see there “a tree” to know the simple fact that there is no balance in real nature. Otherwise, there wouldn’t be any progress and development. Balance, meaning “equilibrium”, exists only in human’s mind. It is abstraction and it reflects static, not developing, a dead subject. There are harmony, stability, and chaos in real nature. A tree, like any live creature, from microscopic nothing to universe, exists and develops in harmony. During certain periods of time its development is stable. There is no static at all. Harmony, stability, and balance are different subject matters like life and death. An artist should never confuse such important things. I’m also pretty sure that the idea of visualization of the “balance” was inspired by the front entrance of ACT which really looks beautiful and, where you can find reflections of maple trees, mountains, rivers and creeks, dynamic and developing that characterized Maple Ridge as a truly wonderful place.

Now a few words about the procedures of collecting a public opinion prior to the public art installation. Indeed, we can collect and keep whatever we like ... at our homes, private galleries, or even publically (if the work is donated, like absolutely wonderful sculpture by Zurab Zereteli installed in New York in memory of 9/11 and which about 50% of NY citizens just hates). If we’re talking about taxpayer’s money, it is a totally different case. Worldwide practice is the following: the shortlisted projects (models of proposed pieces of art) are placed for the public viewing for some period of time. I’m pretty sure that it was possible to find 2 weeks in our Art Gallery’s schedule for such an exposition, widely announced in advance, instead of keeping for 2-3 months art shows with average traffic of 3.5 visitors including gallery staff. I believe that such an exposition would be very interesting, important, and better for the community. Of course, we can say that the decision was made by the steering committee which meetings are open for public, but let us be honest to ourselves: it makes no sense just because most of the people can’t make it when the committee has its meetings. A show of the projects in the gallery, with the voting box installed, would work better.
And only after getting some public opinion, should the committee on it, and make a final decision. Then afterwards nobody can say anything about selection: not only the committee but community decides what is better for it as a public artwork.